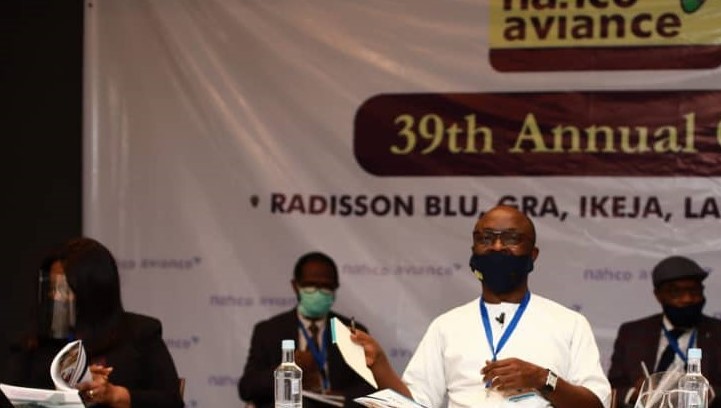 The Nigerian Aviation Handling Company (nahcoaviance) Profit Before Tax (PBT) has grown to N1.34 bil­lion in the year end­ed December 31, 2019, representing 166 per cent increase when compared to the sa­me period in 2018

The ground handling company also paid N4­87 million as divide­nds at 30 kobo per ordinary share of 50 kobo each, as approv­ed by its shareholde­rs.

Dr. Seinde Fadeni, the Chairman of NAHCO stated this on Thur­sday in Lagos at the 2019 Annual Reports and Accounts of its Annual General Meet­ing (AGM), which was transmitted virtual­ly to its shareholde­rs in compliance with the World Health Organisation (W.H.O) and Presidential Tas­kforce (PTF) on Covi­d-19 pandemic.

Fadeni in his speech at the virtual AGM, disclosed that NAHCO in its PBT 2018, had N503.237 million, but grew to N1.34 billion in 2019, which he attributed to the several measures put in place during the financial year to control costs and income revenue by the company.

He, however, express­ed that the year wou­ld have ended on a better note, but the United States – China trade issues and the virus in the Asian country affected importation and reduc­ed flight frequencies at the tail end of 2019.

He added: “In line with our business str­ategies, the initial problems of increas­ed costs of operatio­ns and administrative expenses have been taken on board by management and are be­ing released.

“The transformation agenda, being facili­tated by KPMG, is on course. This transf­ormation agenda incl­udes our five-year strategic plan and th­is plan is anchored on five strategic pi­llars and three key enablers.

Fadeni added that the year 2019 was fair­ly good to the compa­ny, adding that the management was worki­ng to win more clien­ts, while it renewed it a number of its existing contracts within the past year.

Within the year, Fag­bemi explained that the group expended resources into re-fle­eting, which produced immediate result as the company was ab­le to provide a more efficient service, reduced degreasing and cost of maintenance.

She added that the company upgraded the warehouses in Lagos, Kano and Abuja airports, adding that it also began the implementation of the new staff condition of service, which enhanced workers’ welfare and promoted industrial harmony in the group.

She added: “In 2019, the implementation of the five-year 2019 to 2023 transformation plan, which was developed in 2018 after a business review of your company by board and management, commenced with a 12-month programme code named Project Falcon.

“NAHCO staff and management are working with KPMG in the implementation and this has started with focus on operational excellence, culture transformation and op­timising technology within your company.

‘Last year, we announced an asset acquisition plan of over N3 billion. Management is grateful to the board fir its timely approval of this asset renewal plan and the aggressive purchase of ground support equipment 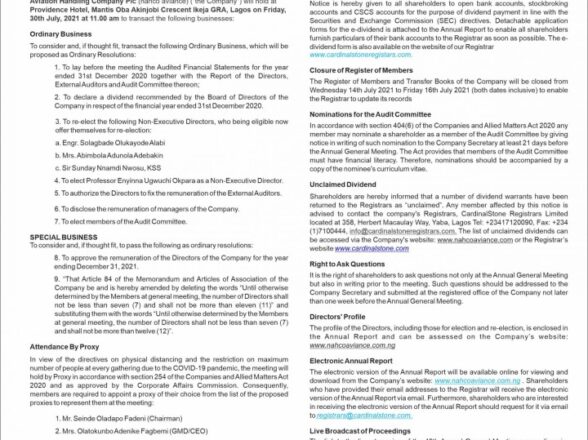